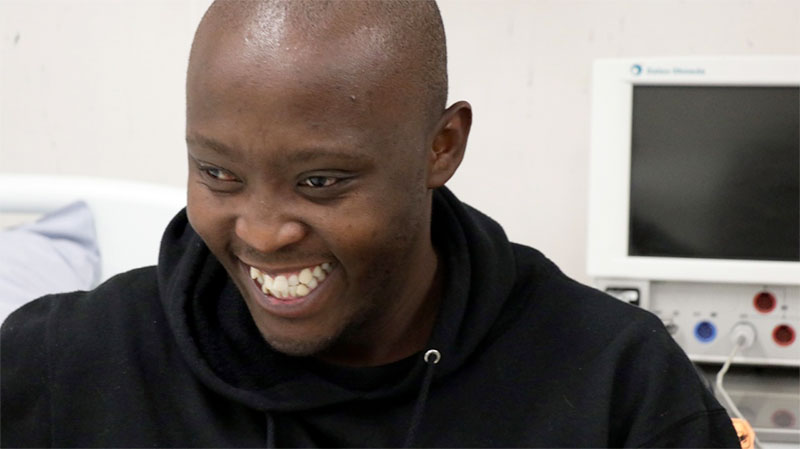 28-year old Sipho Hleza has lived a lifetime of hardship and poverty. Sipho grew up with his grandmother in rural Limpopo. A childhood that, though filled with love, could not provide Sipho with the medical attention he desperately needed.

Sipho had what is called, in layman’s terms, a ‘lazy eye’. Therefore he did not only grow up in extreme poverty, but also had to cope with being teased and bullied about his appearance.

After an unsuccessful attempt to straighten his eyes 13 years ago, Sipho however decided to rise above his self-consciousness and put mind over matter to beat it.

Sipho’s life took a positive turn 10 years ago when he auditioned for the Ndlovu Youth Choir and was selected as one of its founding members.

Ndlovu Youth Choir musical director, Ralf Schmitt, is one of his biggest fans. During a broadcast of Jacaranda’FM’s Good Morning Angels, he described Sipho as a magnificent musician both on and off the stage.

“Sipho’s contribution to the success of the choir is immense. He has progressed from a singer in the choir to being the assistant musical director. He is responsible for taking some of the rehearsals, managing the studio, engineering recordings, sings and plays the bass guitar in performances … and makes an invaluable contribution to the choir.”

When the Ndlovu Youth Choir rocketed into the public eye after auditioning on the TV-programme America’s Got Talent, Sipho once again became painfully aware of his appearance.

Things were looking up

There was, however, light at the end of the tunnel! Operation Healing Hands came to the rescue for Sipho, when, during their 2019 Mandela Day campaign, a strabismus repair procedure was done to correct his ‘lazy eye’. Sipho will soon be able to face the world – and his bright future in music – head on and with clear eyes.

On 23 July the Ndlovu Youth Choir held a benefit concert at the Atterbury Theatre. Sipho Hleza, bright and smiling, could share the stage with the rest of the choir with confidence. All of the proceeds of the concert will be used by Operation Healing Hands to help more patients, such as Sipho, in need.

Become part of the OHH family. By making a small donation you can help us to keep on helping our fellow South Africans by giving them second chances on life! Every little bit can go a long way!